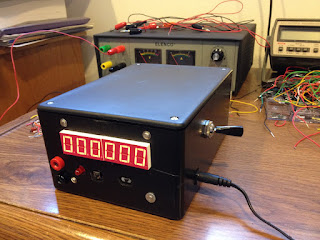 So I decided to actually make a nice version of the frequency counter introduced in the previous posting. First of all I had to design a 2 layer PC board. That was done with the CAD software "Eagle" which generates a set of gerber files that could be used by any PC board manufacturer. I decided to make the boards in China at a fraction of the cost here. The shop I chose was iStore as they had a new year special of $29.99 for 10 boards 10 x 10 cm each. Man that was a good deal, especially that they include solder masks and silk screen and all. I received the boards in about a month, which is a very good turn around time. The assembled board is shown below. Looks real nice. Next I had to make a couple of more PC boards manually to include the seven segment displays and the other accessories. The layout of the boards inside the plastic box is shown below. Once all the wiring was complete (which was a tedious task) I closed the box and as you see it looks like a piece of art. So this is a nice functional frequency counter that works from 1 Hz to 10 MHz. 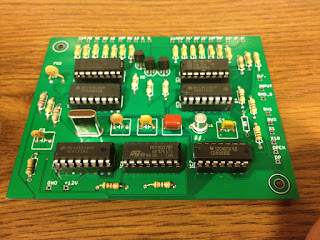 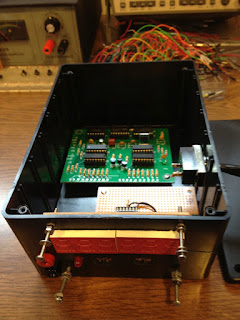 Of course a much better frequency counter could be made with a micro-controller chip instead of all this complicated jumble of ICs but the fun of building something complicated and actually getting it to work was challenging and I could not resist the temptation of it.
Posted by Gamal M Hegazi at 7:29 AM No comments: