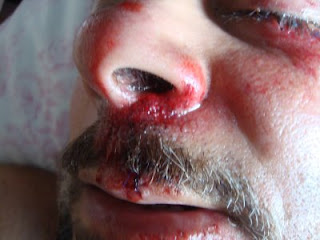 It happened on the Cedar Valley trail last Sunday (July 5th). I remember biking all the way from home to Center Point (at 13 miles north of Hiawatha). I rested there and ate some dates and drank the water I had. I filled my bottle and used the restroom there and then went on my way back home. I remember all went well, and I must have reached the last three miles to Hiawatha, because that is where the dirt road turns into asphalt. Somewhere there I had a blackout, total blackout. I don't remember what happened after that. They told me at home that I rang the door bell, and my bike was there next to me. I told them I had an accident and that I needed to go to the hospital. I don't remember any of that, but they took me to the hospital and they did a cat scan on me and then did some stitching under my left eye, under my nose and lip. I also had a long gash in my leg that was stitched as well. They said after we came back home that I was awake and talking all the time, mainly asking the same questions over and over. I went to bed but they said I kept waking up and asking the same questions again, like: what kind of bike I have, is it a black Connandale? F9 series? They said yes, and I asked again: Did we just come back from vacation in Egypt? Yes. Where do I work? Who is my boss, etc.
My consciousness came back to me some time at night, as I woke up and went to the bathroom and noticed my messed up face in the mirror. I asked a few more questions and slept until the morning. I fully realized what happened in the morning. I sent email to my work telling them what happened and that I was not coming for at least a few days. I took my pain killers and then took a shower. I felt the Tetanus shot in my left shoulder hurting a bit, but the worst thing was the burning sensation in my left eye. The eye itself was not injured, but I had stitches above and below it, and the lid was kind of sagging. Other than that I felt OK.
I am still trying to remember what happened. They say I must have had the accident close to where I live, because it seemed that I walked back home. I don't think so. I think somebody gave me a ride. I vaguely remember as in a dream somebody asking about my ID and me telling them my address. I remembered my address, and I think whoever brought me home had a GPS and also a bike rack. They must have dropped me at home and left.
Where exactly I had the accident or what was the nature of it I have no idea. I don't remember at all. Did a car hit me? The bike has no sign of any dents or scratches, so that excludes the car accident theory. Did I sleep while I was riding my bike and I fell? Did I brake suddenly and flew off the bike? I can't just remember what happened at all. I vaguely remember me stopping to eat some berries along the way. Or as if I missed the berries tree and when I realized I passed by it I braked suddenly which caused me to fly off the bike. I think that is what happened.
I hope that my memory will come back to me so that I remember what happened exactly. I just need to know. It is a period of a few hours that are totally wiped out from my memory and I want that memory back. I want to know what happened. I am lucky that I did not have a more serious injury, thanks to wearing a helmet. Imagine what could have happened if I did not wear the helmet. Wow! Its feels like a dream, except that my messed up face is a cruel reminder that it all happened for real.
Posted by Gamal M Hegazi at 6:34 PM No comments: