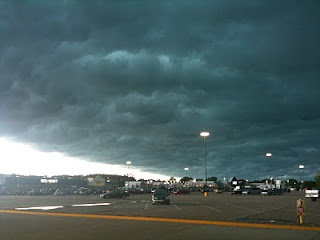 The weather is Cedar Rapids these days is reminiscent of that of summer of 2008 when the city was flooded. It has been storming for several days now and the river level is rising again. Although no flooding occurred yet, but it is quite possible that it can happen. Today for example is hot and humid, and storms occurred last night and are possible again tonight. This makes it hard to do outdoors activities in the summer.
In addition to the lack of outdoors activities there is another problem with stormy weather here, and that is lack of sunshine. For several days the sun did not come through the thick dark clouds and when it came out like today it was so hot and humid that you wish it did not come out.
I should not complain because it could be much worse, but summer this year is surely not as nice as it was last year. So we will have to enjoy what we can and hope for the best.
Posted by Gamal M Hegazi at 5:29 PM No comments: 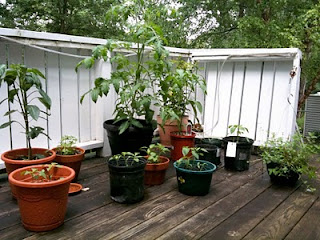 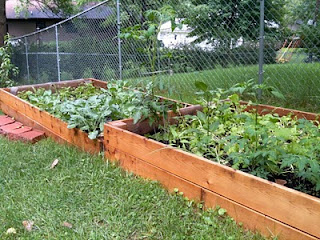 Compared to a couple of weeks ago the deck pot vegetables had a great growth as you can see when comparing this picture with the one taken last time. The tomato plant is incredibly growing and is almost a tree now. We are yet to see some tomatoes coming out of it. The peppers are also growing albeit not as incredibly as the tomatoes. Even the ones started from seed are doing great.
As for the beds you can see they have also doing very well. We have already cut parsley and spinach for our salads from them. Both parsley and spinach continue to produce like crazy especially the parsley. As for the radishes the leaves have been growing very well but the roots did not get a chance to develop far enough to produce the actual radishes. This is because the plants are so crowded. But that is fine, because the leaves are as good as the roots if not better. Actually they contain more vitamin C than the roots themselves. Also they taste as good. So we cut many of the leaves and already used them in salads. The remaining ones are less crowded now so they may have a chance to produce some radishes in the roots.
The cabbages are growing well and I expect to have some produce in the next couple of weeks or so. Same thing for the broccoli. After harvesting the remaining radish plants I intend to grow in their place some lettuces to make good green salads.
The tomatoes and the peppers are growing as good as the deck pot plants but not enough to produce any fruits yet.
The onions are not getting enough sun so I am not sure if they will ever develop. They might but it is taking longer than thought initially. That is why the best investment in this kind of garden would be in green vegetables that don't require lot of sun. This is a lesson learned so far.
Posted by Gamal M Hegazi at 1:47 PM No comments: