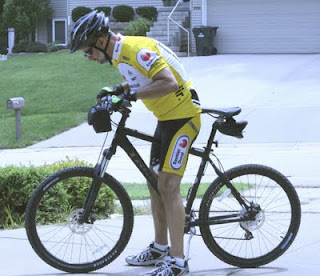 Since I recovered from my bike accident and I have been biking on the Cedar Valley Nature Trail almost daily. My accident caused me to become leery of trails in general, being afraid of having another mishap which would not be good especially at my age, you know too many concussions can lead to some serious head injury eventually. Anyway, I thought how could I protect myself better than I used to. Well how about wearing some protective eyewear so that you don't have to leave the handle bar each time a bug hits you in the eye ... or how about not braking suddenly while looking backwards, da! Well anyway, I got bored of treading the same section of the trail each time, which is from Hiawatha to Center Point (13 miles) . This time I decided to carry my bike in the car, and ride to Brandon so that I could bike from there to La Porte City, some 10 miles each way.
I carried my bike to Brandon, which took about 35 minutes driving on the highway. It took a few minutes to find the trail there, and then some more minutes to find a place to park the car, and off I went on my bike towards La Porte. I kind of lost direction and was not sure if I was going in the right direction or if I was going south to Urbana instead. My confusion did not last long because after about two miles along the road I found that the trail was closed in that direction, so I was forced to go to the other direction. Now the sun was in front of me which indicated I was going south to Urbana. That meant I was going to La Porte the first time. I did reach Urbana from Center Point before but never went past it, so it was still a new section of the trail for me to go from Brandon to Urbana (about 9 miles). The trail in that section was a little different from the sections I was used to. Here the trail is less trodden as evident from the heavy vegetation on it with two narrow paths on either side about the width of a mountain bike tire. It was kind of hard staying on that narrow path, and I was kind of afraid I might fall if I got out of the narrow path to the untrodden terrain. On one occasion I hit a deep hole that sent my bike and I flying high up, but fortunately nothing bad happened other than some rear ache due to impact with the saddle. After about four miles the trail turned into more familiar gravel path wide enough to make the ride easier and more comfortable. After a while I passed a bridge over a small river, then some open fields with cows grazing in them. I crossed some rural roads along the way to Urbana. I was making one mile about every five minutes. At Urbana I ate a small snack that I carried with me, then headed back. Overall the ride was nice and different than before. At least I tried a different section of the trail than what I used to before. Too bad I did not make it to la Porte, but riding between Brandon and Urbana was not bad at all.
I am looking forward to riding on the rest of the trail which is about 52 miles long, one section at a time.
Posted by Gamal M Hegazi at 12:31 PM No comments: