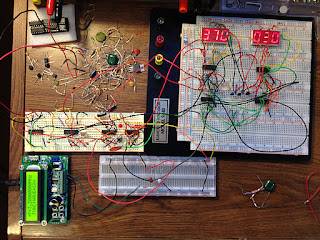 Here is my breadboard of a cheap frequency counter. It is based on the MC14553 counter. The idea is to make the counter count the number of pulses in exactly one second, and display the number on a seven-segment display. This number would then be the frequency in Hz. The counter counts to 999, so I added another counter, which is fed with the overflow output of the first counter. This arrangement extends the measurement to 999999 which is 1 MHz minus one. Then I decided to extend the range to 10 MHz by including a divide by 10 chip (CD4017), and with that arrangement the range now goes up to 10 MHz minus one. Here is a picture of the breadboard reading accurately the output from a DDS synthesizer. It works great and is small enough to be integrated in a little nice enclosure.

Another chip used in the circuit is a CD4521 (24 stage frequency divider) which is driven by a 4.194304 MHz crystal to generate the 1 second timing signal. Actually it generates a 0.5 Hz signal to obtain a 1 second high level and 1 second low level. The frequency measurement is made during the 1 second high level. The 0.5 Hz signal is obtained by dividing the frequency of the crystal by half 23 times.
Another part of the circuit is the wave shaping circuit which amplifies any incoming signal to be measured , turns it into a nice square wave suitable to trigger the counter IC. The wave shaping circuit is implemented with a 2N2222 transistor single stage amplifier, which drives a CD4093 NAND Schmitt trigger IC, which in turn generates the neat square pulses that are suitable to be counted by the MC14553 counter chip.
Last but not least, the measured count is displayed with two 3-digit seven-segment displays that are driven by two HCF4511 decoder chips, one for each.
You can watch the operation of the counter breadboard on this YouTube video.
http://www.youtube.com/watch?v=Ga8Sk-csiKM

Posted by Gamal M Hegazi at 5:28 AM No comments: